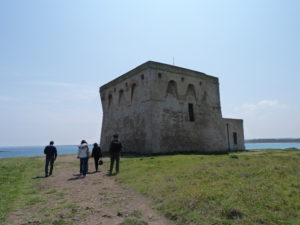 The State Natural Reserve of Torre Guaceto, included in the territories of Carovigno and Brindisi, covers an area of 1114 hectares, much of which is occupied by crops.
Three are the most important natural environments of the Reserve:

Symbol of Torre Guaceto is the Aragonese tower of the XVI century built with defensive purposes against pirate raids, like many others on the coast at a distance of several kilometers.

Olive oil is now undoubtedly the most famous product of the area. The territory of the Reserve of Torre Guaceto has become the protagonist of a significant project for the production of Oro del Parco, extra virgin olive oil from the organic olive groves of Torre Guaceto.

The reasons that enhance the quality should be attributed to cultivated varieties (Ogliarola and Cellina of Nardo), the ideal climate, the structure of the hilly terrain and limestone allow to obtain a product with a very low degree of acidity and, finally, to the commitment of the farmers. Oro del Parco is the proof that another kind of agriculture and land development is possible, respecting the environment, the traditions, the labor and dignity of men.