The Woman of Ostuni, the eternal Earth Mother 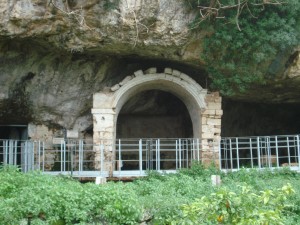 In a cave eroded and created by the sea you can discover the world’s oldest mother.The Woman of Ostuni is more ancient than was thought.

The mother of all mothers, the world’s only example of a late Stone Age pregnant female, found buried in the Ostunese hills of Agnano, never ceases to amaze the people of the White City. Twenty years after her discovery in 1991 by archaeologist Professor Donato Coppola from Ostuni, we now learn that she is older than we believed. Original studies based on carbon dating the tomb placed her at 24,410 years old but recent studies in December 2010 by the University of Leipzig (which specializes in the study of bone analysis) dates her at 28,000 years old.

This proves that Puglia wasn’t an outpost but was of primary importance, inhabited 30 thousand years ago by hunter tribes who had chosen this area as a strategic spot good for hunting and easy to defend. Laying next to the Woman, visitors can see the cast of the Man of Ostuni, an adult hunter buried in the same cave in a foetal position on his side with his back to the pregnant woman. Recent carbon dating techniques dated his burial to 30,000 years ago, which make him older than the Woman of Ostuni. 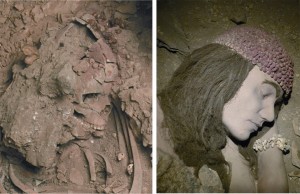 From a perfectly reproduced plaster cast visitors can gather the care with which the young woman, who is nine months pregnant, was buried by the man who, it is presumed, was the love of her life. The hand of the pregnant woman is nestled tenderly in her lap, a protective gesture and expression that we find in fertility goddesses, small round statues from the Late Paleolithic, Neolithic and Bronze ages, like the ‘Venus of Laussel”, which is found in bas-relief in a sheltered cave at
Laussel, in the Dordogne in the South of France. The symbol of the fruitful womb is as old as the art of the statues It represents the Mother Earth, mother of humanity and venerated for this since time immemorial.
The affection and devotion given to this “Earth Mother” of Ostuni, lovingly chiselled in a fetal position can be also be admired by other details such as a bracelet of pierced shells around one of her wrists and a crown that adorns the head consisting of about six hundred Cyclope neritea shells mixed with red ocher. This headgear is similar to that of the “Venus of Willendorf” which has led us to believe that the burial ceremony of the Woman of Ostuni is not limited to the mere eradication of the body through burial, but could also be interpreted as a “glorification” of an unfinished motherhood.