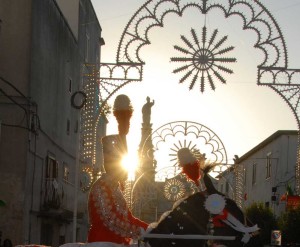 Different women dressed in black brush the voluminous tail of the horse. The others sit, one person next to the other and another sews a white, fine-worked material.
These are the days that lead up to the festivity “Cavalcata”, this is one of many and most important century old traditions which is re-celebrated every year, Saint Oronzo, the protector of Ostuni from the second half of the XVII century. Nearly 40 horses walk the main streets of Ostuni accompanying the silver statue of the Saint. The large part of participants have inherited the honor to take part in the costumed procession, from father to son.

The women of the family of the riders have a fundamental role during the preparation and the days after the “Cavalcata”. It is them that the night of the 26th August, while the night sky is lit by fireworks, start to un-sow the fine-worked material and the lace that decorate the clothes on the main horses. They un-sow everything in order to conserve every material with care. It will then be opened up again when the festival comes again the following year. 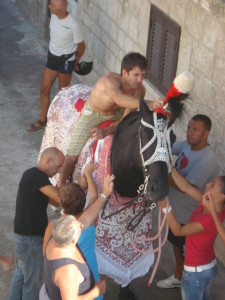 The Ritual of Dressing

At three in the afternoon on the 26th August of every year in many courtyards of antique houses in Ostuni one can assist to the dressing of the horse.
“Lu descetàlu, lu descetàlu. Who has taken lu descetàlu?”.
This is what you will hear shouted: they are the voices of the wives, the mothers, the grandmothers of the riders who look for their thumble’s, the precious instrument that they use to sew. There are the last minute touch’s on the dress of the horse. With a little soap they soften the needle and patiently cross the threads of a tradition. At six o’clock everything is nearly ready. The only thing missing is the horses hat, the horses hair-dressing, and the last brush. At seven o’clock the rider mounts his horse to start the celebration of the Saint, who with a miracle made water run from a cave, refreshing the city.