The historical white city of Ostuni is built on a solitary hill, called the mount of Ostuni, and sits at 229 meters above sea level.

‘La Terra’ is the name given to the city’s oldest quarter.
On its peak sits the Cathedral which can be seen from the Adriatic coastline and adjacent to the old town of Ostuni there was once a Norman castle, dating back to 1148. It was built by the local people but today no trace remains as it was destroyed in the eighteenth century by Duke Bartolomeo Zevallos.

La Terra has the characteristic layout of an Eastern City. Even Old Ostuni has a circular lay out like a Casbah where the most important thoroughfare (via Cattedrale) and is surrounded by a labyrinthine collection of narrow, winding streets, many of which converge on the Cathedral like a ray of sunshine, whilst others lead to wonderful panoramic views that will surprise and delight visitors.

Anyone who visits the “White City” can spend hours exploring this hidden gem. 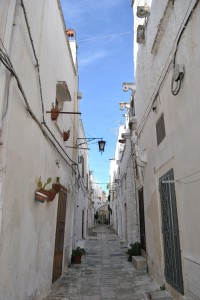 The scent of fresh laundry hanging over a balcony, the aroma of basil blowing in the breeze and the trickle of water from the fountain will remind you how charming and unique this place is. It’s advisable to visit the area known locally as “lu spessìte” (The meaning behind “Spessìte” dates back to the Latin word “spissus” which means crowded, compact or close) famous for its tortuous backstreets including Via Balsamo de Landria, vico Clemente Brancasi and vico Villanova (see map inside).

The word ‘Terrone’ has been used more and more in Italy as a negative way of referring to Southern Italians. People have even been prosecuted for using the term in derogatory fashion.
Looking backwards in time we find out that people have been using it since the 1600s, originally in reference to an often overbearing landlord.

Worth reading: Pino Aprile, a Pugliese journalist and writer, has written a book titled: “Terroni. Tutto quello che è stato fatto perchè gli italiani del Sud diventassero meridionali” (‘Everything That Was Done so that the Italians of the South Could Become Southerners’). The book can be purchased at Bottega del Libro, Corso Mazzini, 10, Ostuni.